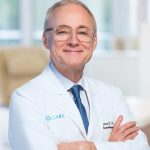 At just 24 years old, Ben Eslick was your typical man in his mid-20s. He played the bass in a local band, Couch Jackets, worked as a  video editor and enjoyed spending time with his girlfriend, Molly.

All of that changed in March 2019 when he went to the urologist for a physical due to some irregular pain. The urologist discovered a marble-sized tumor in his testicles, and, after immediate surgery, confirmed by biopsy that the tumor was positive for testicular cancer.

As a young man with the entire world ahead of him, Ben said his thoughts immediately turned to, “What does my future look like? What will this require of me to get better?”

To answer those questions, Ben was referred to medical oncologist Dr. Sneed who eased his worries by assuring him that this particular type of cancer was easily treatable and would likely call for only one round of chemotherapy.

While this news was welcomed, Ben said his stress then turned to the prep period before starting chemo.

“This time was stressful for many reasons,” Ben said. “One being it was in the middle of a somewhat intense recovery period from my surgery. I had also just started a new job and had lots of plans I had to put on hold in order to start chemo. I guess no time is convenient for cancer, but my timing felt especially inconvenient.”

In the early days of his diagnosis, he said that Dr. Sneed’s biggest advice for his physical and emotional well-being was “to not lay around feeling bad for myself or being isolated.” Instead, he encouraged him to “continue to live my life normally, as best I could, with reasonable consideration for how the chemo would affect me.”

In total, Ben underwent 21 chemotherapy treatments over the course of nine weeks. Of what kept him going, he said it was the internal countdown that reminded him “I was one day closer to being done each time I sat in that chair.”

He credits the support of his extended support system, especially his girlfriend, parents and brother, for helping to keep his positive mental state as he approached and went through each treatment.

Ben received good news on May 23 when he said “Dr. Sneed told me officially that my tumor marker levels have reduced significantly and that my body is responding really well to the treatment.”

He’s optimistic that he can finish this current round of treatment and hopefully be finished with this chapter of his life.

Through it all, Ben said, “I found a cathartic outlet in making creative musical energy that reflected my experience.” He chose to document his emotional journey in hopes of “making every experience positive and the future as bright as possible for myself and others going through this.”

He and his fellow bandmates have chosen to turn those personal reflections into their next album, titled “Spud Has Cancer,” referencing a nickname given to him by his friends. They have launched a GoFundMe campaign to raise money for the album. They will donate half of the funds raised to The American Cancer Society, which supports multiple programs at CARTI, including our Appearance Center. To make a donation, visit https://www.gofundme.com/quotspud-has-cancerquot….

More from our conversation with Ben:

How has your cancer journey impacted the person you are today?“It’s made me mentally stronger. I have a new outlook on life and I’m not taking it for granted.”

What does the word “survivor” mean to you?“A survivor is someone who comes out on the other end of something difficult. While that experience should have broken them, it didn’t, it just made them stronger.”

If you could give advice to someone who just received a diagnosis, what would it be?“I think the most important thing would be to remind them that they are brave and that it’s important to remember that at every step. It’s so important to remember that whatever happens, don’t forget to live your life as fully as possible and don’t get swept up in the mental trap of it all. But it’s also okay to take it easy and let your body heal.”