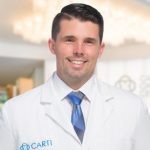 By Dr. Brent Cameron
As seen in the September/October issue of the Healthcare Journal of Arkansas.

To combat this, we must provide the most advanced prostate cancer treatments that are both effective and limit side effects that may negatively impact a patient’s quality of life. Because if they’re going to live longer, they should be able to make the most of those years.

With only two proven treatment options for prostate cancer – surgical removal of the prostate and radiation therapy to the prostate – patients have to navigate an extensive list of differences between the two when selecting their choice of treatment. Most patients choose their treatment based on how their decision will impact their quality of life. They explore the option from both a medical and personal perspective, including how it will affect their long-term urinary, bowel and sexual functions.

Over the last several decades, both the surgical and radiation oncology fields have made advancements in technique and technology that increase remission rates and decrease side effects.

In the 1980s and 90s, radiation therapy for prostate patients would have been delivered from three to four different angles, with the radiation beam being aimed at rough estimates of where the prostate was based on marks on the skin or pelvic bones. While this type of treatment was state-of-the-art then, we now know that it is not the most accurate approach and that it often led to secondary damage to nearby organs, primarily the rectum and bladder. Most patients experienced side effects in these areas during or after their treatment. Minor advancements were made, and the standard of care evolved in the early 2000s to include lower doses of radiation five days per week for as many as nine weeks. The rationale for this extended course of treatment was that side effects would be limited while still providing an effective cure.

Fast forward to today where we have experienced a rapid evolution in the delivery of radiation for prostate cancer. We now have the technology and the tools necessary to deliver on that promise of providing effective treatments that limit harmful side effects.

Modern technology allows the prostate to be visible in near real-time before and during the radiation treatment, ensuring that the delivery is much more accurate and precise. Gone are the days of 45 treatments over nine weeks; we’re now offering patients as few as five treatments with the same results, making radiation therapy a more convenient treatment option.

To further reduce the side effects of treatment, we now have another tool in radiation oncology – SpaceOAR Hydrogel, a polyethylene glycol-based spacer that is inserted between the patient’s prostate and rectum ahead of their radiation therapy. The radiation oncologist, or in conjunction with a urologist, injects a water-based gel via a one-time, minimally-invasive procedure that can be done in the clinic or procedure suite. While it does require a few needle insertions, many patients report that the procedure is actually less painful than their original diagnosis biopsy. The gel is mostly water, which allows it to completely liquefy and naturally absorb into the patient’s body within six months, ultimately exiting the body through the patient’s urine.

In most patients, the extra half-inch of space between the prostate and rectum significantly reduces rectal toxicity, and, in some cases, allows us to drastically reduce the number of treatments they must undergo. A clinical study concluded that the reduction of radiation doses to the rectum resulted in maintained bowel function over time. In the study, men who underwent radiation therapy without SpaceOAR were eight times more likely to experience a decline in bowel, urinary and sexual function when compared to men who underwent radiation therapy with SpaceOAR.

While not all patients are eligible for SpaceOAR, it is a tool that radiation oncologists and urologists should consider exploring when creating a treatment plan for their patients. Together, we can ensure that more patients can live their life to the fullest, even after a prostate cancer diagnosis.