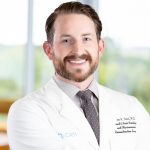 As seen in the July/August issue of Healthcare Journal of Arkansas
By John Sims, M.D.
Head and Neck Oncologic and Microvascular Reconstructive Surgeon

Head and neck cancers affect a range of areas in the head and neck that play a critical role in the day to day life of patients. A patient’s ability to speak, swallow, taste, see, hear or even breathe can all be compromised by a head and neck cancer, depending on where it originates. Not only can the cancer itself cause a variety of functional impairments, but the treatment for the cancer can also cause permanent disability in these areas. While curing the cancer and preserving the life of a patient is viewed as an oncologic success, this success is short-lived when a patient is left functionally impaired and with a poor quality of life. This reality has led to a shift in focus from not only positive oncologic outcomes but optimal functional outcomes for the patient as well. Recent advances in both technology and surgical technique have allowed for improved outcomes on all fronts for two of the most common types of head and neck cancers: oropharyngeal cancer and oral cavity cancer.

The Rise of Oropharyngeal Cancer and Transoral Robotic Surgery (TORS)

The oropharynx, which includes the tonsils and the base of the tongue, is a challenging area of the head and neck to access surgically. Historically, oncologic oropharyngeal surgery often required dividing the jaw at the midline and swinging it laterally in order to access the most posterior portion of the tongue and pharynx. Due to the morbidity of surgical treatment, in the late 90s and early 2000s, cancers of the oropharynx were almost universally treated non-surgically with high-dose chemotherapy and radiation. But with the recent rise of HPV-related cancers and advances in minimally invasive surgical techniques such as transoral laser microsurgery (TLM) and transoral robotic surgery (TORS), the pendulum has started to shift back toward surgical treatment of tonsil and base of tongue cancers. In 2009, the surgical robot was approved for head and neck surgery by the FDA, and it is now offered at many major cancer centers across the United States, including CARTI Cancer Center in Little Rock.

Use of the surgical robot has many advantages, most notably the ability to remove hard to reach tumors through the mouth and avoiding the morbidity of previous surgical approaches. TORS has resulted in faster operative times, shorter hospital stays and improved functional outcomes for patients – all without sacrificing oncologic success. Up front surgical management of oropharyngeal cancers has also allowed for more accurate staging, as well as, avoidance or decreased doses of radiation and/or chemotherapy. Clinical trials are currently underway to identify additional treatment de-escalation following TORS. Early results have shown promise for further reduction of treatment side effects and improvement of functional outcomes.

While the surgical removal of advanced oral cavity cancers has not changed significantly over the last several decades, our ability to reconstruct the defect left by the ablative surgery has advanced greatly. The development of free tissue transfer for head and neck reconstruction in the late 70s and early 80s was a giant leap forward and is now the standard of care for advanced head and neck cancer reconstruction. The use of advanced microvascular techniques allows for the transfer of virtually any type of tissue – skin, fascia, muscle, bone, nerves – with designated arteries and veins that can then be sewn into a new blood supply in the head and neck. This allows the transferred tissue to take on a whole new life in the head and neck and take the place of the removed tongue, jaw, etc.

While this type of surgery is complex, tedious and requires longer operative times, advances in the field over the last 30 years have led to a greater than 95% success rate. However, this success rate is purely a measure of the transferred tissue surviving and the patient healing from the surgery. It does not consider the final function and quality of life of the patient.

While a large part of reconstructive surgery relies on the expertise and experience of the surgeon, recent technological advances have allowed for further refinement of reconstructive strategies. Three-dimensional computer models can now be created based on CT or MRI scans of the patient. Using these models, surgeons can pre-plan surgical cuts around a tumor, as well as plan and design the reconstruction weeks before a patient’s actual surgery. These computer models are then able to be 3D printed, sterilized and used at the time of surgery as a three-dimensional road map for the surgeon, allowing for pinpoint accuracy to the millimeter. Studies have shown that this advanced technology can shorten the time a patient is under general anesthesia and ultimately improve patient outcomes. These 3D-printed models can also be used as a patient education tool that allows for improved preoperative understanding, empowering patients to have a more active role in their cancer care in a time of their life when they often feel the most powerless.