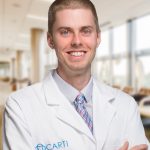 As seen in the January/February 2022 issue of the Healthcare Jouranl of Arkansas.

In the 1940s, chemotherapy was ushered into a new era of usage as the anti-cancer effects of mustard gas derivatives and folic acid antagonists were first recognized. Over the next few decades, different variations and combinations of drugs were tested and studied, and by the early 2000s, virtually all of the chemotherapy agents commonly used today had been discovered.

In 2003, the completion of the Human Genome Project revolutionized cancer research and drug development, as the same techniques could be applied to sequence a cancer cell’s entire genome. With this, the field of molecular profiling exploded and there is now immense focus on finding and developing drugs capable of targeting and shutting off a cancer’s specific “driver” gene mutation.

Today, innovative companies like Caris Life Sciences, Foundation Medicine, Tempus and others can perform comprehensive molecular profiling on very tiny samples of a tumor. Hundreds of genes can be analyzed on a single specimen using a combination of techniques including high throughput next-generation sequencing, immunohistochemical staining, fluorescence in situ hybridization (FiSH) and polymerase chain reaction (PCR).

Although most gene alterations identified by these comprehensive testing methods are not yet able to be targeted pharmacologically, the ever-increasing number that are can be life-changing for patients. Unlike traditional chemotherapy, which typically requires an intravenous infusion in the infusion suite for several hours a day, as well as premedication to help alleviate nausea and potential infusion reactions, the majority of these newly developed molecularly targeted drugs are available as pills, and are often well-tolerated with only modest side effects. Additionally, these tests are covered by health insurance plans, and results are usually back within 10 to 14 days.

Lung adenocarcinoma, the most common type of lung cancer in both women and non-smokers, is a prime example of how molecular profiling has led to a complete paradigm shift in how we treat some cancers. Historically, metastatic lung adenocarcinoma was treated with cytotoxic chemotherapy with limited success, and progression of disease was expected in a matter of months. We now recognize that approximately 15% of lung adenocarcinomas harbor a mutation in the epidermal growth factor receptor (EGFR), and this number is even higher in certain minority populations. We currently have five EGFR inhibitors FDA-approved for EGFR-mutant lung cancers: osimertinib (Tagrisso), erlotinib (Tarceva), afatinib (Gilotrif), gefitinib (Iressa) and dacomitinib (Vizimpro). Patients who receive these oral drugs initially, rather than chemotherapy, often live for several years. This would have seemed impossible only a few years prior. Other common targetable gene alterations seen in lung adenocarcinomas are ALK rearrangements (present in about 4% of lung adenocarcinomas), MET (3%), ROS1 (1-2%), RET (1-2%), and BRAF (1-3%). All of these also have at least one, if not multiple, targeted therapies available, which can sometimes be used in succession to great effect.

Important advances in other cancers have been made as well. For hormone-positive breast cancer, the most common subtype of breast cancer, the mainstay of treatment is estrogen inhibitors, with chemotherapy reserved for later lines of therapy. The recent discovery of alpelisib (Piqray), an oral inhibitor of the PIK3CA gene, which is mutated in up to 40% of hormone-positive breast cancers, can often delay the need for cytotoxic chemotherapy for an additional year or longer when added to an estrogen inhibitor. In cholangiocarcinoma, a rare and aggressive cancer of the bile duct, the standard approach has been combination chemotherapy with usually only modest effect. Recognition that about 15% of cholangiocarcinomas harbor a mutation in fibroblast growth factor receptor 2 (FGFR2) led to the development of an oral inhibitor of FGFR2, pemigatinib (Pemazyre), which was FDA approved in April 2020. While some genetic mutations are seen only in association with a specific type of cancer, others can be found in a wide range of malignancies. NTRK mutations, for example, can be found in thyroid cancers, salivary gland cancers, sarcomas, melanoma, pancreatic cancer, colon cancer, cholangiocarcinoma, lung cancer and breast cancer, among others. Larotrectinib (Vitrakvi) and entrectinib (Rozlytrek) are two oral inhibitors of NTRK now in clinical use.

As our ability to identify alterations in a cancer cell’s genome and then subsequently develop specific mutation-targeted inhibitors continues to advance, I envision a not-so-distant future where we have a menu of multiple oral targeted agents to select from for any given cancer, perhaps even able to completely spare a patient from the toxicities of chemotherapy.