Justin Morgan’s Story | Fighting for the Next Generation 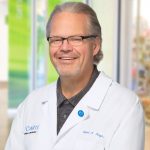 As Justin Morgan moved into his late twenties and early thirties, he started to experience fatigue that, at times, felt more severe than just your average tiredness. He chalked it up to getting older and working harder, and admitted that he let it continue for nearly two years.

But, as time progressed, so did his symptoms. He began noticing that he wasn’t digesting his food as well and something just felt “different”. The symptom that ultimately led him to seek immediate medical attention was seeing blood in his stool.

Justin’s physician encouraged him to have a colonoscopy to identify the cause of his symptoms. During the screening, the physician saw what he believed to be cancer, though he didn’t know the specifics. His gastroenterologist referred him to CARTI for followup scans, where Justin realized he knew Dr. David Hays, medical director of the imaging department.

Justin said, “Dr. Hays helped me through the next steps, and really any and all steps afterwards. He said Dr. Gentry would be a great physician and that she would help us through the process.”

Based on the recommendation, Justin chose Dr. Rhonda Gentry as his medical oncologist. It was during their first meeting that he learned the official diagnosis and the full scope and depth of his particular cancer.

Of hearing the official diagnosis, Justin says, “I was still a little numb from everything. I had no idea what cancer entailed or what it meant to fight it. All you see are the horror stories and people that are fighting so hard, so I just assumed I had a fight in front of me. I immediately started to worry for my wife and the life we had planned.”

To add to his worries about the future, he and his wife found out they were expecting their first child just a week later. So, now more than ever, he had a reason to fight.

He says, “The IV chemotherapy was much stronger and included more than one session. This was daunting to say the least, plus it completely wiped me out for days at a time. Sometimes I could barely get out of bed for up to seven days.”

Through it all, he says that it was the upcoming arrival of his daughter that “gave me something exciting and refreshing to keep my mind on.”

Abigail was born just eight days after his final chemotherapy treatment, and one month before his final surgery to reverse the ileostomy from the removal of a section of his colon. He says “I had just enough time to enjoy the birth.”

Today, at 31 years old, Justin said his cancer journey has “given me a different outlook on life and the choices I make. Small things do not matter as much and it’s really woken me up to see some more important things.”