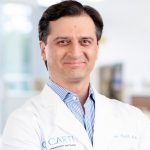 While many cancer patients are blessed with a support system that rallies around them throughout their cancer journey, it’s inevitable that not every feeling – both positive and negative – will be fully understood purely because their friends and family may not have experienced a cancer diagnosis themselves. That’s not the case for Sara Clevenger and Christy Wygal, a mother and daughter who completely comprehend the other’s journey because they’re both currently living with a cancer diagnosis.

Sara’s diagnosis came first, when in February 2016 her blood work came back irregular during her annual checkup. As her physician investigated the irregularity further, they did a CT scan that confirmed Sara had ovarian cancer. With the urging of a friend who had previously been treated at CARTI, Sara sought the care of medical oncologist Dr. Omer Khalil. Together, they chose for Sara to have surgery followed by chemotherapy, which she has continued off and on until today.

Fast forward three years, March 2019, when Sara’s daughter, Christy, found herself in a similar situation. While undergoing her annual mammogram screening, Christy’s doctor found a spot that they thought was “probably benign”. She was told to come back in six months to check on the spot and see if there were any changes. When she returned six months later, not only had the original spot grown, but there were now two additional spots. Christy’s doctor acted quickly, doing a biopsy that day, which confirmed she had breast cancer. After watching her mother receive treatment at CARTI over the past three years, Christy says “I knew I would use CARTI because my mother has received such excellent care here.” She came to CARTI where she became a patient of medical oncologist Dr. Rhonda Gentry.

While their individual journeys have varied – different diagnoses, different side effects – their outlook has remained the same, positively blessed by the support of each other.

“Having my mother right there with me has made a huge impact,” said Christy. “I had watched her battle cancer for three years before my diagnosis, so I already knew a lot because of what she had been through. I knew I could do it, because I had watched her do it.”

Sara shares her daughter’s sentiment, saying, “Being able to compare notes and go to treatments together has been a huge support.” Admittedly, as the mother, she continues, saying, “It has been hard to watch my daughter lose her hair and know what she is facing and what the side effects feel like. But it has also been joyful to see her handle it so well.”

While this mother-daughter duo continues with their treatment plans at CARTI, they are optimistic knowing the other is right by their side.

Christy says, “My mother and I have always been close, but sharing cancer brings it to a completely different level. If I have to go through this with someone, I’m thankful it’s her.”