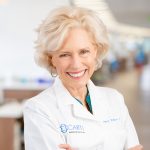 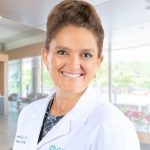 In December 2019, Norma Lopez discovered a lump in her breast, a lump that had not been noticed just a couple weeks earlier during her annual pap smear. She returned to her OBGYN who referred her to Dr. Jerri Fant, CARTI’s breast surgeon, for a biopsy. When the results came back, they confirmed that Norma had invasive ductal carcinoma, more commonly known as breast cancer. Norma was shocked to hear the news, especially considering she had just received a clean bill of health just weeks earlier.

After the initial shock settled, she chose to move forward in her cancer journey, going under the care of CARTI medical oncologist Dr. Diane Wilder. Together, they decided that Norma would begin chemotherapy treatments to shrink the tumor so it was as small as possible, after which they would do a lumpectomy. After just a few treatments, Norma’s hair started falling out. As the front desk receptionist at PerfectVision in Little Rock, where she’s worked for the past 20 years, Norma is the first person most clients see, and she admits her appearance has always been a priority.

She decided that she could not continue brushing out clumps of hair, so she made plans with a friend and local hair stylist to shave her head. Those plans were halted when her coworkers surprised her the next day.

The day she was set to shave her head, Norma arrived at work to the news that her supervisor was offering to shave her head for her. Surprised, she said she immediately thought, “Okay, let’s do this.” As Norma sat to have her head shaved, she was overcome with emotions. Grief at the changing of her appearance, but also an immense sense of gratefulness in the crowd of supportive coworkers who held her hand and stood beside her in this momentous moment.

The surprise didn’t end there. As a sign of greater solidarity, Norma’s coworkers decided that they were going to take it to the next level by sitting in the same chair and allowing her to shave their heads, as well. It was now her turn to wield the clippers. One by one, Norma’s coworkers sat down and allowed her to shave their heads. 12 people in total, including one young woman who had been growing her hair for six years and the company’s CEO, shaved their heads that day.

Once a woman who thought “Why me?” in response to her diagnosis, Norma says “That day showed me that they were ready to step up and stand by me. I didn’t feel alone anymore.”

Of the experience, coworker Samantha Byrd said, “What I wanted to make sure she walked away feeling is that she’s not fighting this alone, and that she has her family here. We’re going to be by her side the entire way.”

Norma says she is forever grateful to her co-workers for shaving their heads. Plus, she was also recently told that some of the company’s external clients and vendors had heard her story and chose to do the same thing. Over the past few weeks, she’s been inundated with videos and photos from people across the country shaving their heads in her honor.

The company’s outpouring of love was perfectly summed up in this email sent out from Norma’s employer.

“Some days at work are more than just responsibilities, they are impactful, touching and unforeseen.

For those that don’t know, our own Norma Lopez was recently diagnosed with breast cancer and has started chemo. Due to the chemo, she is now losing her hair.

Josh Wilson, her direct report, came in yesterday with his head shaved in support of her. Knowing she is going through a very difficult time, he wanted her to know he is standing by her side. Jeremy Sanders was also wanting to show his support for Norma, last night he texted “Bring your sheers tomorrow. I want to cut my hair to show my support for Norma.”

Norma had actually planned to have her hair cut tomorrow, but changed her mind and decided to have it done at work after she saw Jeremy and Josh’s support.

Then the word got out ….. WOW!! We had about twelve people today, men and women, show their support for Norma and say we are standing beside you during this difficult time. Even Bob Chastain, our CEO, and his son Nick, who had not cut his hair in two years, joined in!!

We had the privilege today of helping Norma take a step towards prepping for her battle she is going to win!

Norma from the International, Telco and Fiber team we love you and are here to support you !!

We LOVE YOU and are here for you!!”