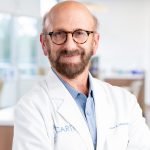 A cancer diagnosis has a ripple effect that can touch the lives of those close to a patient, and even those who live far away. This sentiment was most recently felt with breast cancer patient Jan Crosby when she rang the bell, signifying that she had finished her final round of chemotherapy treatments. As she rang the ceremonial bell, Jan clutched an arm full of cards, each filled with well wishes from loved ones from across the country.

It’s no surprise that so many people love this woman. Her smile lights up a room, radiating a genuine sense of love and compassion. But at 58 years old, and just one month after her mother had received her own cancer diagnosis, Jan’s light extinguished, if only for a minute.

During her annual mammogram, Jan’s physician discovered calcifications in a small area of her breast. After a biopsy, it was confirmed that she had ductal carcinoma in situ (DCIS), non-invasive breast cancer. Jan ended up having a lumpectomy that confirmed even more, she actually had two different types of breast cancer, one invasive and one not, that had been missed on the biopsy.

Due to the invasive breast cancer, Jan had to have a second surgery, lymph node removal, two weeks later. The pathology report on her lymph nodes came back clear, so it was time to tackle the original cancers in her breast. For this journey, she chose CARTI.

Under the care of Dr. Lawrence Mendelsohn, medical oncologist, and Dr. Michael Talbert, radiation oncologist, Jan has spent the past 15 months undergoing four treatments of chemotherapy and 33 rounds of radiation treatments.

The hardest part she says was tackling her diagnosis at the same time that she was caring for her mother who was going through her own. “There was a time when my mother was scheduled for her radiation treatment, my 13-year-old dog had gotten very ill and I was scheduled for my lumpectomy. It took some coordination and planning; it really did take a village.”

She credits her “survivor mode kicking in way early” for how well she felt throughout treatment. She says “I was very fortunate not to have the nausea and GI issues. The steroids made me feel flushed and itchy, but I accomplished so much in the three days following treatments. I would drive to Stuttgart and do my mother’s yard work before daylight the next day, and I didn’t miss any days of work.”

And of that survivor mode she felt, Jan says that she defines it as a conscious choice to “not let cancer take control.” She says, “I jumped through all the hoops I had to – did my treatments, lost my hair, kept working. But I kept believing ‘this too shall pass’.”

A nurse by trade, Jan knows that her story may impact others going through their own diagnosis. To them she suggests “praying for yourself and all the others who are fighting along with you. Also, it’s okay to expect miracles. They happen every day.”

Like thousands of patients before her, Jan knew her final day of chemo would come and it’d be her turn to ring the bell. She arrived that day more than ready to take that step, but completely unaware of how many would be joining her for this momentous moment.

While they couldn’t all be there in person, more than 40 people joined her in spirit by sending greeting cards filled with love and inspirational words. From her family and neighbors to loved ones living in cities across the country, Jan was overwhelmed with emotions as she spent her final treatment reading card after card.

With tears in her eyes and her mom and infusion nurse by her side, Jan proudly rang the bell on August 29, 2019. With three tolls of the bell, Jan put her 15 month journey behind her and embarked on her new life post-cancer.

And embark she did. The next morning, Jan set out for a celebratory trip in New Orleans, followed by a multi-state tour of National Parks, including Mt. Rushmore; Crazy Horse; Yellowstone and the Grand Tetons.

Today, Jan credits her cancer diagnosis with “making me much stronger, wiser and more appreciative of the little things.”